With the extreme fire danger in Northern California looming and PG&E preparing to shutdown power to as many as 800,000 customers, CalFire moved to deploy its assets to respond quickly if a fire broke out.

One of those deployments moved a giant water-sucking Skycrane helicopter to a pad on the southside of the Livermore Airport. Pilot Bill Neckels flew the Siller Helicopters from an assignment in Porterville to Livermore Wednesday. My long-time friend and retired Army helicopter pilot, Chris Miller, arranged for us to spend some time talking with Bill and learning about the operations.

We had finished talking when Bill and his co-pilot received a call. After about 10 minutes for final checks and to warm up the 9,000 horsepower chopper (with two engines), they took off and helped CalFire control a fire off Highway 84 in Sunol near Little Valley Road. It was contained in less than an hour with about 12 acres burned.

It was the third year in a row that a Siller firefighting helicopter has been stationed at the Livermore Airport on standby. It took a bit of negotiation between the CalFire staff and the airport management over fueling the helicopter before they figured out a solution.

The Siller team travels with its own $350,000 double-tanker rig that hauls aviation fuel for the Skycrane. They are self-contained with another truck and trailer carrying the three-man team of mechanics. Neckels said that once the helicopter is dispatched to fight a fire, depending upon the location, the tanker truck will follow it so it can spend the maximum amount of time in the air. He said they’d refueled in the median of a freeway on occasion or any other spot that the 18-wheeler can pump fuel into the chopper.

When he took off Tuesday afternoon from Livermore, the Skycrane’s water tank was empty. The aircraft weighs more than 29,000 pounds with a load of fuel and hits about 41,000 pounds when 2,000 gallons of water are added. Notably, the hose can load 2,000 gallons in just 45 seconds as long as 18 inches of the steel cage are underwater.

When the Skycrane is flying to a fire, the CalFire aerial spotter often will direct it to a nearby water supply. Tuesday evening, Bill skipped the gravel pits on his flight to Sunol and presumably tanked up in that area.

Depending on the terrain, that can be a pond, a river or a cattle pond (CalFire makes ranchers whole by trucking in water if a chopper fills up there.

The Skycrane, in contrast to helicopters that use big scoops to carry water, can fly over homes and businesses because its water tank is enclosed. 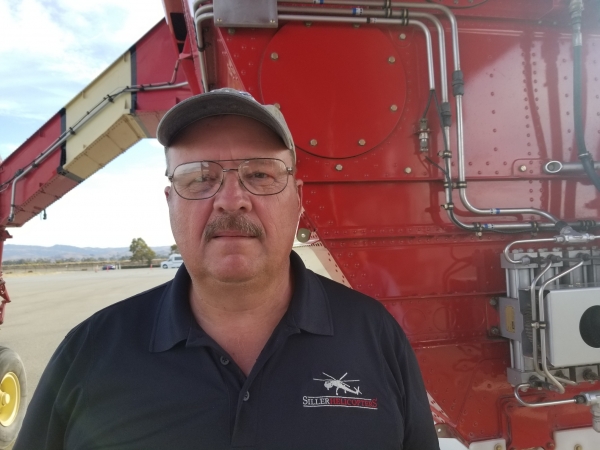 Once the sun goes down and flight operations are concluded, then the three-man maintenance team swings into action. The trailer has built in spotlights and mechanics wear headlamps to work on the helicopter. It takes 10 hours of maintenance for each flight hour, thus the three-man team.

Teams work 12 days in a row and then have 12 days off. For Bill, that means flying back to his cattle ranch in Idaho (more than 1,000 acres) and enjoying some time with his wife. He’s a retired Army warrant officer, who, like Chris Miller, flew helicopters on active duty. That included 18 months in the Sinai Desert. Chris observed that Bill has thousands of hours piloting helicopters.

What was clear during our conversation is he is passionate about using the helicopter to fight wildfires. He works for Siller Helicopters that is headquartered in Yuba City. Safety is The Key to Siller Helicopters Success